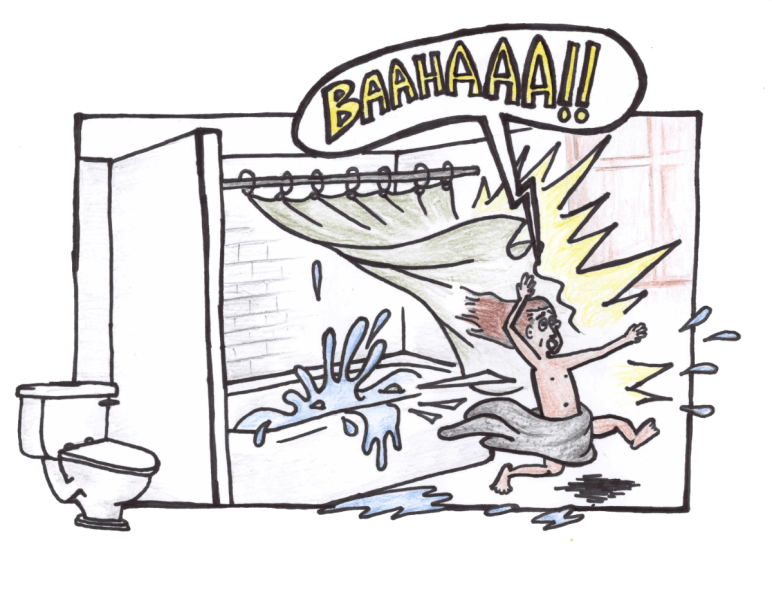 Lately I’ve been scooping poop out of the bathtub. I can hear what you’re saying. “Poop goes in the toilet Josh, not the bathtub.” You should explain that to my two year old daughter! I can tell Adi has pooped in the tub because she lets out a horrified shriek and scrambles over the side of the tub like an elephant climbing out of a watering hole after a herd of crocodiles surface. She immediately turns around and peers into the tub. Where did these strange things come from? They weren’t in there a minute ago. She looks at me. “Don’t look at me, Adi.” I tell her. “That’s your doo-doo, not mine.”

“Well, clean it up!” Janice yells from the kitchen.

Mmmm, I hadn’t thought of that.

Scooping poop out of a bathtub would be relatively unremarkable in itself but this is the third time I’m doing it. This is not what we had in mind when we said we wanted to potty train Adi, our two year old. Maybe I could install a bigger drain and a toilet-like flush valve on the tub. I wander if you can buy toilets big enough for toddlers to take baths in? There may be a market there. I’d buy one. Sigh. That’s what I’m fantasizing about lately. I used to fantasize about more impressive things. But that’s the life of a parent I think. I also never thought I’d be writing a blog about poop but here I am.

Actually, great things are accomplished by doing the mundane. Raising children into responsible adults is an awesome thing. Doing missionary work can change the lives of an entire nation. But it involves being faithful in the small things and small things are boring. Like cleaning poop out of the tub or learning how to decipher AN bolt designations in the hangar. It’s easy to lose focus on the bigger picture.

But that’s no excuse.

It’s easy for me to assume that, since I’ve been immersed in the Bible since I was young, I’ve read the whole book by now. I’ve come to the realization that I take the Bible for granted. I want to change this in my life.

We’re going through this apprenticeship at MMS Aviation so we can use aviation to help get the message of the Bible to all nations and translated to all languages. We want people to read this book! But the Holy Spirit convicted me the other day that I’ve never actually read the Bible from cover to cover in sequential order. If the Bible is as important to me as I claim, then I should make sure I’ve actually read the whole thing, right? I got most of it covered during my life but it’s only been a portion at a time and I’m sure there’s a few verses in Obadiah that I’ve missed. If it’s important, I really need to read all of it, not just the highlights on Sunday morning. What a hypocrite I’ve been. I can just imagine my sales pitch to an unreached native.

“This Book can change your lives!” I wave around a Bible enthusiastically.

“Cool! What does it say?” Let’s assume this guy speaks English.

“Well, I never actually read it cover to cover, but you definitely should.”

I’d probably get a spear through the head. Let’s be honest, we all want to spear a salesman who doesn’t use his own products and so I’m reading the Bible cover to cover, even the mundane genealogy chapters and the awkward Song of Solomon book that preachers never talk about.

Don’t be afraid to ask me how it’s going.

Step by step, the bigger picture is accomplished. If we take each step carefully, the journey will be a success. But if we focus too much on each step, we’ll lose sight of where we’re going and end up walking the wrong way. So I guess the moral of the story is to walk cross eyed with one eye on the details and one eye on the destination.

Talk about getting lost. Take Elliot, our five month old, as an example. He just rolls around willy nilly and usually ends up stuck under the rocking chair with his feet in the air. “Waaaaah!” I run over and plop him in the middle of the room, then quickly sprint back to whatever I was trying to get done. If I’m lucky, I just bought myself maybe five minutes before I have to go reset the baby. It’s actually not that bad. He chews on everything at head level but since he doesn’t have any teeth he doesn’t do any damage. Our shoes, chair legs, and magazine rack have never been cleaner. I’m worried though that our house may get mold because Elliot’s slobber keeps the humidity so high. There are small patches of fog floating around the stair banister. That, along with Janice’s potted plant obsession, makes our house seem like the Amazon rainforest. In fact, sometimes I’ll get up from the couch to go to the bathroom, take a wrong turn, and find myself in the woods down by the creek, never realizing I left the house miles ago.

That’s why Janice insists that I keep the .22 in the downstairs closet. “Those pesky groundhogs keep digging through the living room.” I’d suggest getting rid of a few potted plants but she loves her potted plants as much as she hates groundhogs and I’ve never seen her miss her target, especially if she’s using the van. Most people clean bugs off of their cars but I have to scrub raccoons and alfalfa off of our bumper.

Speaking of animals, last weekend we went to the Columbus Zoo with Grandma and Grandpa Snader. The animals were in cages though so Janice didn’t get to hit any with the van.

Can you imagine being married to a man who blogs about you unexpectedly? I want to thank my lovely wife Janice for being such a great sport and an amazing human being to live with. We’ve been married four years as of September 19, 2019! Four years ago and some change, I packed almost everything I owned into my 1989 Chevy cargo van and drove west to marry her. I did leave some non-essential things in my friend Andrew’s house. He’s still texting me pictures of things he finds in his basement. “Is this yours?” Also, my exhaust fell off in Ohio and I never stopped to pick it up. I was afraid the van wouldn’t start again. Happy anniversary Janice! I love this story we’re writing together, even the mundane chapters.