Janice’s parents were visiting last weekend and bought us a hummingbird feeder. Now we have several hummingbirds flying around our back porch, fighting over the sugar water supply like a bunch of Middle East tyrants. Hummingbirds are pretty neat and all but they aren’t that special. If I fed Adi nothing but sugar water for two days, she could fly around like that too. This is precisely why we keep sugar away from our two year old. It’s one thing to have a hummingbird fly into your patio door, it’d be another to have a toddler crash through it. Goodness, she’s already knocked the screen door off five times in the last week. Plus, a child with the ability to fly like a hummingbird would make the fence I built useless. Actually, it already is because Adi figured out how to climb under it.

I was halfway under the van, replacing the tie rods and the alternator. Janice was complaining that the van was “wobbly” and the brakes were “mushy.”

“Honey,” I said, “There are plenty of women in Africa who would be happy to have a wobbly van.”

Lately Janice has been watching TV shows about lawyers and it’s starting to show in our marriage. She wins all the arguments.

So there I was fixing the van out in the driveway. I had the gate shut so Adi was confined to the yard. I don’t mind if she “helps” me fix things, but I tend to focus solely on the job on hand and before I realize it, my child has hitch hiked three counties over. This makes Janice mad! So to be safe, I made Adi stay in the yard. You could understand my confusion then when Adi poked her head under the bumper. “Daddy fik it!” she said.

“Adi, how did you get past the fence?” I asked. Asking a two year old a question is polite but kind of pointless.

She giggled and ran out of my sight, probably to hitch a ride to Muskingum County. I scrambled out from under the van by carefully banging my forehead into the oil pan, jamming my elbows into the suspension, and using my fingertips to build the momentum I needed to clear the undercarriage. I sat up and watched her as she flopped onto the ground, wiggled under the fence, and then ran towards Janice, who was sitting on the porch. We’re raising a little groundhog! There are apparently some engineering flaws in my fence design.

We were driving up into Holmes County the other weekend so I could buy work boots when we came up behind a minivan driving miserably slow. I know from personal experience that minivans are capable of driving much, much faster. When there’s a crying baby in the backseat, Janice surprises even the engineers of the Dodge Caravan. They watch Janice skid around a curve on two wheels then they look down at their clipboards with bulging eyes and mutter, “But that’s not even possible.” Today, however, I’m driving and all four wheels are on the ground because we’re crawling along Ohio’s back roads. I’m tempted to let Adi out so she can run alongside the van. What’s wrong with this people? Then I noticed an out-of-state license plate. Ah ha! Tourists! Whenever an Amish buggy would appear, they would slam on the brakes, swerving and gawking while pointing and excitedly talking to each other like they just saw a bilingual unicorn. “That’s kind of rude,” I said to Janice. Then I had a brilliant idea! I carefully explained my idea to Janice. She stifled a laugh and quickly sobered up. “I think that’s offensive,” she said. In the multitude of counselors there is wisdom so I will share this idea with you guys to see what you think.

You know how they have these animal parks where you can buy food and then feed it to the animals as you drive through the park? Well, this is the same principle. For example, an enterprising individual could bake some whoopie pies and then set plates of the delicacies out on a table beside the road with a sign “Feed Amish. $5.” Then tourists could buy a plate, drive around until they find an Amish, then feed them whoopie pies while asking questions about the Amish way of life. It’ll boost the local economy, promote tourism, and make the local Amish community happy as well. Now before you get offended, I know several Amish personally and I know they would embrace this idea. In fact, they’d be the ones selling the whoopie pies and then lounging by the fence five hundred yards down the road, ready and willing to explain their way of life.

But that’s just idle chit chat. Like Janice likes to remind me, I should focus on the things that matter, like killing spiders.

The basement of our farmhouse is home to generations of spider families. Young spiders leave the web, travel upstairs to the bedroom closet, make their fortune, and then retire to the basement to spin a multi-million dollar web and then die of old age. Our basement is like the Florida of the spider world. Several decades ago the economy went sour and vast regions of the basement have turned into decaying ghetto, kind of like Chicago. This leaves only gangs of spiders lurking in the corners waiting for my wife to come do laundry so they can leer at her and shout offensive things. She comes up from the basement waving her arms around her head. “Do I have spiders in my hair? Check my hair to see if there are spiders in it.” The lousy freeloaders frequently try to bum a ride to the more prosperous areas of the house.

“No…” I push the bun around on the back of her head. “I don’t see any…” I pause as I quickly flick a leggy looking thing off her head… “spiders.”

Along with a wobbly van, Janice also dislikes spiders so the other weekend I was down in the basement cleaning house. I had cut both ends off of a 4′ metal broom handle and Duck taped it to the end of the Shop Vac. This way I could suck the cobwebs out of the corners without climbing into the corners myself. As I was sticking the broom handle into all the dark corners of the basement I found clothespins, balls of lint, and several petrified mice. Then a thought popped into my head. What if a spider had killed that mouse, sucked out the brains, and left it? Wow. That would’ve been a big spider. My skin started crawling around on my body and my hairs began doing the heeby jeeby. As I progressed through the basement, I began to imagine myself in a video game and each ceiling beam was a new level. What happens when I get to the last beam? Maybe they’ll be a boss spider I’ll have to defeat. I began nervously glancing around. Maybe there’s a big spider watching me right now, getting madder by the minute. Maybe he’s just waiting until my foot swings past and he’ll jump out and grab it. I began to replay the scene from the Lord of the Rings where the short midget guy with the fancy gold ring gets attacked by a giant spider and spun into a web. Suddenly something rubbed my leg. “BAAAAAA!!” I began galloping around the ceiling with the Shop Vac bouncing around the rafters behind me. When my inertia subsided I looked around and found our cat sitting in the middle of the basement floor looking amused.

I finish cleaning the basement by drenching every surface with a spider spray called “Miss Muffet’s Revenge.” I love the name. It’s the main reason I bought this brand. If you apply the spray somewhere out of the weather, the spray should keep on killing for a year after the initial application. Good luck spiders! Miss Muffet’s Revenge should be considered an essential oil in my opinion.

So that’s about it for drama around here. Oh, today Janice said that Elliot was sleeping in the other room. Suddenly he started screaming! Janice came running around the corner to find Adi standing there innocently twiddling her thumbs. Elliot was about five feet away from where Janice put him.

“Heavy,” Adi said, “Heavy.” Apparently Adi is strong enough to carry 15 lbs about 5 feet before she gives up.

This blog is just a hobby but what we are passionate about is helping to reach the lost and isolated with the help and compassion of Jesus Christ. In many places in the world, aviation is a necessary tool to do that. 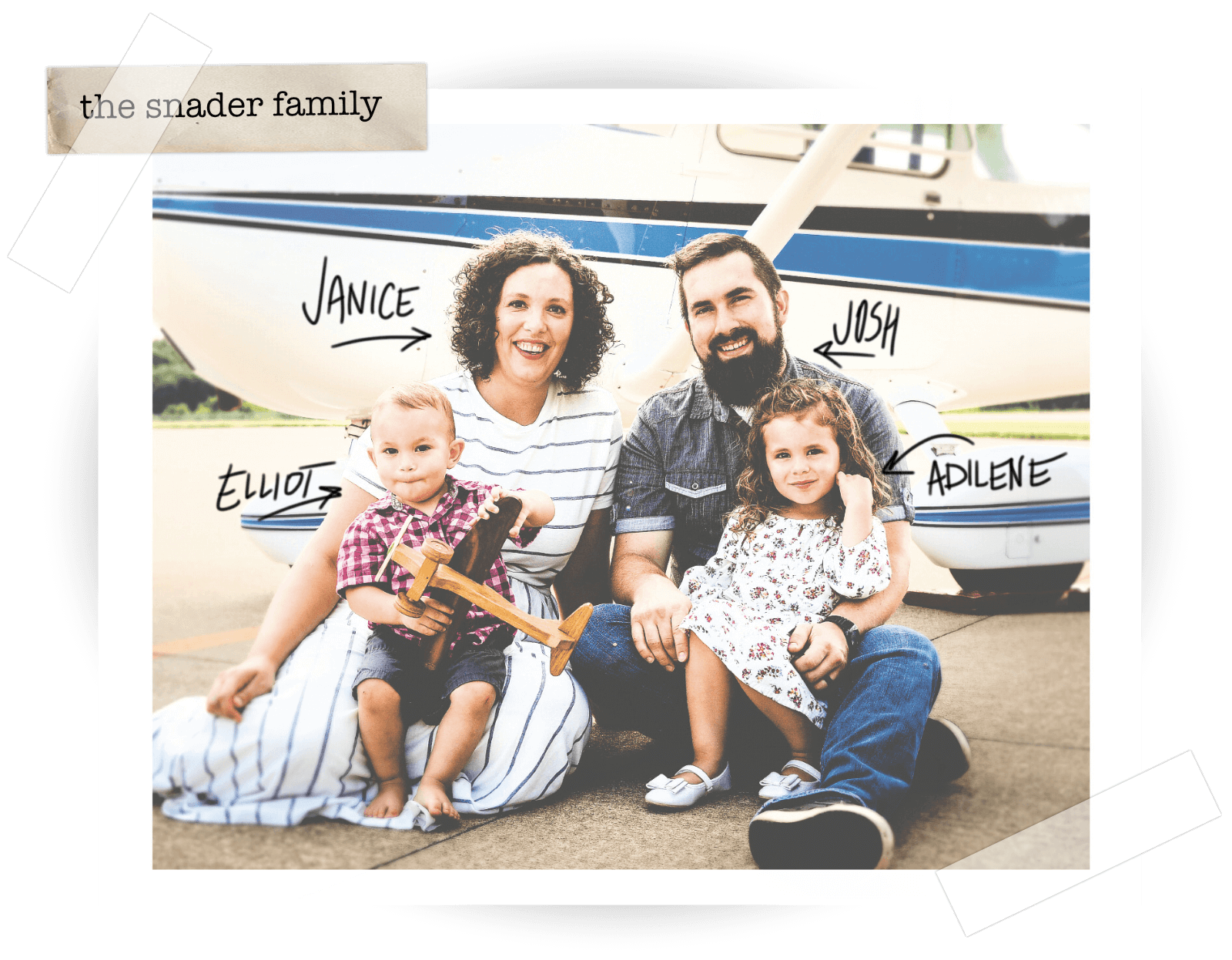 My name is Josh. There’s my wife Janice, and we have two kids: Adi (oldest) & Elliot (our youngest). I’m serving at MMS Aviation fixing missionary airplanes getting the experience and licenses I need to serve on the front lines of the Great Commission. Airplanes get missionaries where no one else will go. Because a bunch of amazing people support our family financially, we don’t need to charge mission aviation organizations any labor charges for our services. The work done in MMS Aviation’s hangars saves over a million Kingdom dollars each year. We work on aircraft from every corner of the globe.

About Us |  Contact Us |  Why Airplanes? |  Support Us Financially