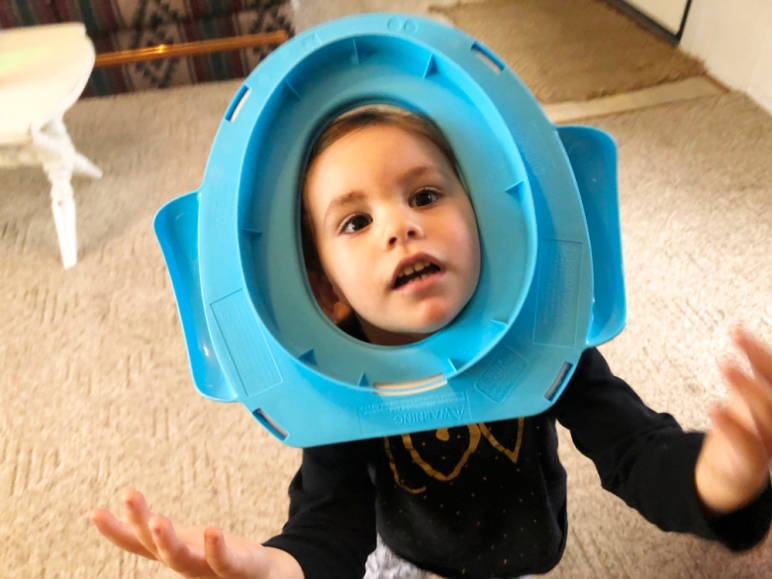 It’s been a tough week. Don’t get me wrong, in the realm of history, it has been a cinch. My family hasn’t been kidnapped in the middle of the night and thrown into a concentration camp. My family hasn’t died from the black plague. We have running water and electricity and don’t have to sit on a donkey for five hours to get to the hospital in Goshen. Things really aren’t that bad although I think that during the night a herd of beavers climbed up my nose and built a dam in my nasal passages. If you meet me and I look perpetually astonished, don’t worry, it’s just the sinus pressure that’s making my eyes bulge out of my head like that.

Janice has been complaining because apparently I steal rolls of toilet paper out of the bathroom and then place them around the house so they’re readily accessible when I need to blow my nose. The problem is that they’re not so accessible when you’ve finished doing your business on the toilet and need to wrap things up. Hey, at least I’m not wasting money on “facial tissue” just so I can blow my nose; Butt tissue works just fine.

Janice and I went to Goshen Hospital on Thursday to get Little Baby Snader turned the right way. We were a little disappointed that God didn’t come down in a cloud of blazing heavenly glory and miraculously turn the baby the right way for us so we wouldn’t have to go to the hospital, just like we requested. I mean, it would’ve taken just His finger, or even just a spoken word, to get it done. Or just send an angel to do it, we aren’t picky – we just want results! The manual version procedure (or “flipping the baby”) is painful and the hospital had to have an operating room on standby in case Janice needed an emergency c-section so I can’t imagine it’s going to be cheap. We’ll find out in a couple weeks when we get the bill. Goodness, you walk into the hospital and sneeze and they’ll charge you $1,000 for a Kleenex. Then, two weeks after you’re home, they’ll send you an additional $500 bill for a “Kleenex consultant fee.” Nonetheless, after praying and pleading for a week with no miraculous results, we surrendered to whatever needed to happen.

Manually turning the baby is successful only 54% of the time and so there was a good chance it wasn’t going to work. I wasn’t full of confidence as they smeared lube all over Janice’s belly. The physician (we’ll call her Hilda) got on one side and the midwife (we’ll call her Matilda) got on the other. “I’ll push down here, you pull up there.” So that’s what years of training sounds like, I thought to myself. They dug their fingers into Janice’s belly and began grunting, sweating, and shaking as they squished Janice’s stomach around like a ball of Play-Doh. Those babies are stubborn! However, two minutes into the procedure I had a good feeling about the progress. You could see a vague outline of the baby and even my untrained eye could tell that the head and butt were starting to switch places. “How’s it going?” I asked hopefully to anyone in the room. Janice gasped, grimaced, and glared at me. Hilda huffed. Matilda puffed. They just ignored me. Ignoring the husband is standard practice in the maternity ward and probably a smart thing to do. In about ten minutes they stepped back. “I (puff) think it’s (huff) there!” Hilda said.

“Really?” Matilda seemed a little unsure. “That was (puff) easy.” Apparently Matilda had worse experiences than this one. They whipped out the ultrasound machine to double check and sure enough, the head was down where it should be. We stayed for another hour as they monitored the baby to make sure everything was OK in there. After an hour we got the green light and we were out of there! We celebrated by buying coffee at the Electric Brew and having an adult conversation. Adi was being babysat by Grandma so there was no stinky diapers or spilled coffee to distract us. Spilling even a drop of a $200 cup of coffee is quite distracting to me. I get down on the floor and try to lap it up with my tongue. Then I throw my head back and yell, “Whhyyyyy???!!” at the top of my lungs. Sometimes you get a free replacement cup.

Janice and I were discussing all the recent events when Janice said, “You know, I think God is more concerned about changing our character than He is in performing miracles.” She’s right. We all want the testimony but not the trial that makes the testimony possible. Everyone who has been used by God mightily has undergone a series of trails; even Jesus. Who do we think we are that we’re any different?

Anyway, as far as trials go, this upside down baby was a small one, really. I think God, when he surveys the truly terrible things that happened throughout history, is tempted to roll his eyes when we come along and almost lose the faith because we had to go through something slightly inconvenient, such as a toothache or lost car keys. It’s like my two year old daughter Adilene when she wants some candy. She points to the cupboard. “Candy?”

“AAAAAAAAAAA!” She throws herself on the floor and beats the tile with her tiny fists, shrieking like her daddy when he spills a cup of $200 coffee. Of course, being a responsible adult, I know that not having candy to eat is a pretty insignificant problem compared to spilling coffee and doesn’t deserve the face melting drama that is playing out in front of me.

We can all thank God that I’m not, in fact, God. I’d be like, “Get a life you, entitled weeny” and I’d slap some sense into that spoiled Christian. Of course, I think God does do that at times but, just like a good father, He also cares about the “dumb” little things as well because sometimes the small things are big to us. In all truthfulness, I’m glad God has grace with petty whiners because I fall into that category too often to admit.

Janice would agree with me. “When you get sick you write a blog about it and the whole world has to know how miserable you feel.” She’s right. I don’t handle suffering silently.

Another thing that’s been disappointing to us these last two weeks is that our support raising has hit a lull. We were told by our support coach that the 70 – 75% mark is a hard spot to get past. We’re finding that’s true although we do have some exciting potential partners in the works! Tuesday I’ll be giving a presentation in front a mission board of a church I never knew existed before one of Janice’s college friends invited us to come speak. So pray for us as we try to be honest and yet still make a good impression. It’s truly a hard combo to nail down sometimes.

Also, speaking of trials: We lost the remote for our TV and so now it only has one volume setting: annoyingly loud! I think Adi may have put it in the trash. She likes putting things away. She is frightfully organized at times. She’s constantly assigning ownership to things and then she goes on a mission to get that thing back to its owner. For example: She’ll find my hoodie which I took off while chopping wood. I carefully folded it and laid it up on the wagon so it stays clean. Adi will find the hoodie and think, “This is Daddy’s! It belongs to him. I shall find him and redeem his property to his rightful possession.” She’ll grab the sleeve and drag the hoodie through the yard, the chicken coop, the woods, down the sliding board, through the flowerbed, into the shed and across several piles of greasy tools where she’ll find me working on the motorcycle. “For Daddy,” she’ll say, shoving it into my face. I’ll be clenching a wrench between my teeth while balancing a motorcycle wheel on my nose, trying not to spill gas out of the gas tank I’m holding between my knees.

“Mmmphait” I’ll mumble, trying to shove words out around the wrench in my mouth.

“For daddy!” She’ll reiterate. Then, tired of waiting me for me to get it she’ll shove the hoodie on top of the gas tank. Adi does not wait well. “Gank you!” She’ll say after she’s given it back to me, happy that she did her part in organizing the chaotic world around her. Daddy now has his grease covered hoodie full of pine cones. All is right with the world.